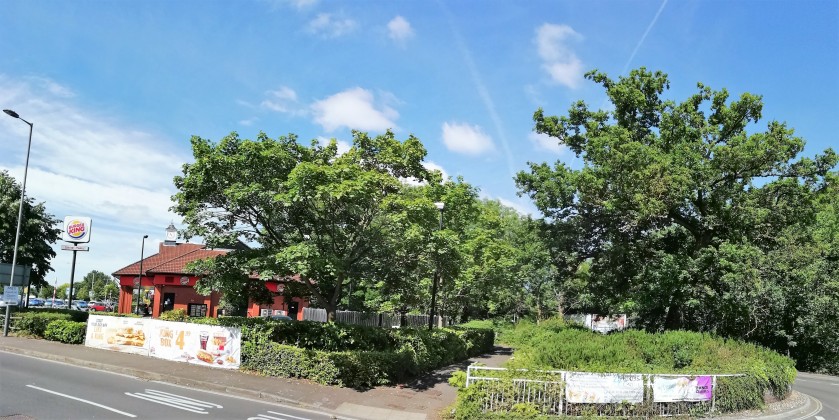 The Development Control Committee will be meeting this Thursday – 21 June 2018 at 2 pm to decide whether outline planning permission should be given to remove the last vestige of an older woodland that once connected the Frome & Eastville Park with St Werburgh’s and the heart of Bristol beyond and redevelop this site. Small though the copse is, it still forms part of the green space in which we live and gives pleasure to many to many of those who pass by.

Here is the location plan: 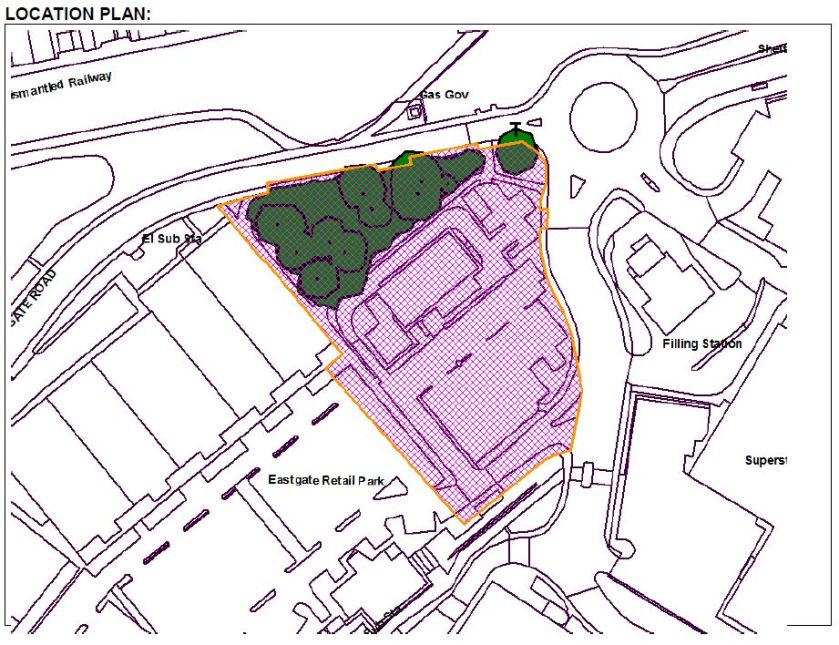 This is what is being proposed – the living copse is gone and a few lingering specimens are left standing alone (for how long?) like exhibits in a museum, with new plantings (what species?) dragooned into neat lines like so many extras, but away from the main commercial activity which takes centre stage:

The paragraph headed ‘TREES’ in Development Control Committee’s summary is instructive and says it all:

‘The application was submitted with insufficient survey detail to cover all the trees on the site including the understorey, and how they would be impacted by the proposed development. However, it is clear that one mature poplar tree would remain (adjacent to the existing retail unit on the western end of the site) and possibly one mature ash tree within the remaining area of landscaping following implementation of the scheme. It should be noted that the chances of this ash tree surviving are slim, as more than 40% of its root area would be removed. In the absence of an Arboricultural Implications Assessment or an Arboricultural Method Statement it is not possible to assess whether what is shown to be retained is in fact feasible. It is highly likely that much of the existing tree cover shown to be retained will be lost. The majority of the understorey would not survive the works proposed and any remaining understorey would be unprotected and more vulnerable to adverse weather. In short, given the proposed layout the conditions suggested will only be certain of protecting one mature tree. All the remaining trees will in all likelihood be lost. In terms of the ecological quality of the trees to be lost, the following additional comments can be added: The area of green infrastructure contains six ash trees that have been identified in particular as locally notable trees of age and are characterised as being ‘transition veterans’. This means that they provide important habitat due to their age and characteristics within a heavily built-up area where habitats are limited and they have the potential to become potentially important veteran trees for biodiversity in time. It should also be noted that this group of trees provides a significantly greater ecological benefit than a single tree as proposed. The group of trees also provides an element of future proofing the site, as if a single tree is lost due to the natural laws and forces of nature others remain that continue to provide ecological benefit.’ We agree!

If Bristol City Council is serious about its long-term goal of doubling tree canopy cover to 30% by 2050, it cannot allow this endless nibbling away of the little we already have, especially in places like the Eastgate Retail Park, already the victim of an older, unenlightened and merciless policy of development ‘desertification’.

Leaving just one or two specimen trees as a token concession to us ‘tree huggers’ really no longer suffices in the face of mounting evidence that the removal of trees, especially in urban environments, is more than just a question of utility and aesthetics, but impacts us and the world we live in immediate and direct ways by damaging our physical and emotional well-being and degrading the environment we depend on.

It is too late to submit questions, but petitions and statements may still be lodged as long as they are received by the Council at the latest by 12 Noon this Wednesday, 20 June.  They can be emailed to democratic.services@bristol.gov.uk.

Statements will not be accepted after 12.00 noon on the working day before the meeting unless they have been submitted in advance to Bristol City Council but were not received by the Democratic Services Section. Anyone submitting a statement for an application will also be allowed to speak in support of it at the meeting.